Hi there,
Could you please explain backward function of GSpMM? dgl/sparse.py at master · dmlc/dgl · GitHub

I am not understanding several things.

It would be great if you kindly provide a detailed description about it. It will be really helpful to understand.

You could find more explanations in our paper (Appendix B).

Hi, I was going through the Lemmas in the appendix. I thought it might be a good idea to ask here. 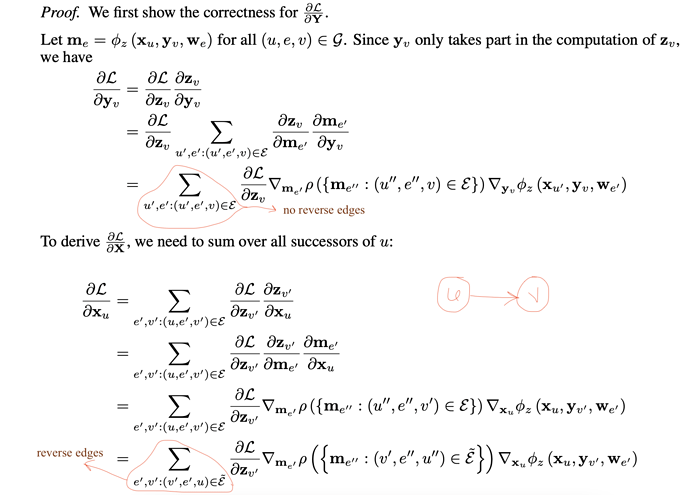 In the attached figure of Lemma 4, dL/dy_v does not have any reverse graph whereas dL/dx_u has reverse edges. Could you please explain why is this case? Does it consider that there is an edge from u to v as drawn? I assume while taking p.derivative with respect to x_u, which is the representation of node u, it performs this operation for all outgoing edges. But why is that? Shouldn’t it be the opposite? Please, explain a bit. It will be very helpful to understand.

Let’s use a simpler case. Suppose the message function \phi_z computes the message as m_e = x_u and the reduce function \rho sums all the received messages x_v^{new}=\sum_{(u, e, v)\in\mathcal{E}}m_e. You could verify that the computation is equivalent as multiplying the node embedding matrix X with the adjacency matrix A:

The transposition of A is equivalent to the reverse of a graph.

Another way to understand it is that according to chain rule multivariable case, the gradient of a variable is the sum of the partial derivative of each component. For a graph, an x_u is used by all its out-going edges during forward propagation, so the gradients need to be summed over the reversing edges.

Thank you so much. This is really helpful to understand.